A rail joiner is a piece of metal that joins the ends of two rails together. Rail joiners are made of soft metal and can be difficult to use if you are not experienced with them. This guide will help you be successful.

A rail joiner is a small piece of metal that wraps around the bottom of the end of a rail. It is placed so that half of it grips the end of one rail and the other half grips the end of the next rail. This keeps the rails lined up and holds them together. The rail joiner also carries power for the engine from one rail to the next.

The reason rail joiners are hard to use is that they are made of fairly soft metal. But they can be a tight fit, so you may have to push hard to get them onto the rail end. If you are not careful, you will squeeze or bend or twist the rail joiner as you are trying to get it onto the rail. Once that happens, it is almost impossible to bend it back into usable condition.

Once the joiner starts to slip onto the rail, carefully push it only about a third of the way on. Don’t push it on past halfway. If you do, the joiner will be widened out so that it won’t grip the other rail tightly. 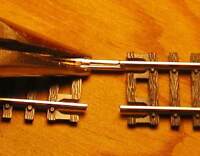 If you do this carefully, you will end up with the joiner about half on each rail. If it is quite a bit more on one rail than the other, you may use your needle nose to move it more toward centered. But be very careful as you do this, because if the joiner gets bent open even a tiny bit, it will no longer be able to keep a secure grip on both rails.

You will find that once a joiner has been used, it is almost impossible to reuse it. When a new joiner is pushed onto a rail, it bends open just a tiny bit. When you pull it back off, it does not fully close back to its original gap. So when you push it onto a new rail, it slides on very easily and does not take much hold. This is not generally a problem for alignment of rails, but it can be a problem for power through the rails. If a joiner is loose, then the track past the joiner may not have power, or it may have power interruptions as trains pass by.

You may think that you can squeeze a used joiner back together, but this is hard to get right. If you squeeze a joiner with a pliers, it will almost always close a little too tight. Then when you try to push it onto a rail, it will be so hard to get on that it will bend or twist as you push it, and it will often end up bent so that it is pretty much destroyed.

The only way I have had success with squeezing loose joiners back together is that after I squeeze them I use a very tiny screwdriver to gently open them back up just enough that they are at the correct width. But it takes a lot of practice and careful work under a magnifier to learn to do this.

You may think that you can solve the problem of loose joiners by soldering them to the rails. But that is almost impossible to do successfully. It is no problem to solder a joiner to a rail, but the rail is held in place by tiny plastic fingers that are part of the plastic ties under the rail. When the rail gets hot enough to melt solder, it is more than hot enough to melt plastic, so the tiny plastic fingers soften and the rail comes out of them or pushes them sideways. The result is often a section of rail that is no longer at the correct distance from the opposite rail. (This distance is called gauge.) If the gauge is wrong through a section of track, then you will get derailments and other problems.

You may think that you can solve the problem of loose joiners by gluing them to the rails. But this doesn’t work because most glues are not conductive. So the tiny layer of glue between the joiner and the rail will act as an insulator and will prevent power from flowing from one rail to the next. The only exception that I know of is a product I have discovered that is called Wire Glue. I was not able to find this for sale on ebay, but it is available from some other online merchants.

You may think you can solve the problem of loose joiners by squeezing them tighter after they are on the rails. But I have found that this doesn’t seem to work. If you take your needle nose pliers and squeeze a joiner that is already on a rail, you will find that it gets looser instead of tighter. Apparently squeezing against a rail causes the joiner to deform in a way that makes the opening wider instead of narrower.

The easiest and probably best solution to a loose joiner is to throw it away and use a new one. Joiners cost about 5 cents each, so it isn’t expensive to do this for a few joiners.

But one major point of this whole topic is that if you use track that uses rail joiners, you cannot take it apart to put it away. When you put it together, you must mount it to something and store it without taking it apart. There are various ways to mount track, too many to discuss here. One of the simplest and cheapest is to use a piece of foam board insulation, and to use double sided tape or craft glue to hold the track in place on the board. But there are lots of fancier ways to mount track. Note that the normal way to hold track in place is with tiny nails called track nails. These are very nice, but you will find that a solid board like a piece of plywood is so hard that you can’t push track nails into it. So if you use a solid board, plan to use glue or double stick tape to hold the track down. See my guide “Mounting Track to Start a Model Railroad Layout” for more ideas on mounting track.

Note also that these cautions about rail joiners do not apply to the type of track that comes mounted on a plastic roadbed. The most common of these is Bachmann EZ track, but Atlas, Kato, and other companies make this type of track as well. These types of track use rail joiners that are permanently attached to one rail. These joiners are made of better metal, and they can be taken apart and put together multiple times without becoming loose.